Last month my eldest, Ella, celebrated her 12th birthday.  12!!! How did tht happen! Me, the mother of a 12 year old. I could write a whole blog post of it’s own about this topic… and that gorgeous girl. But this is a cooking blog, so I’ll keep it food related. 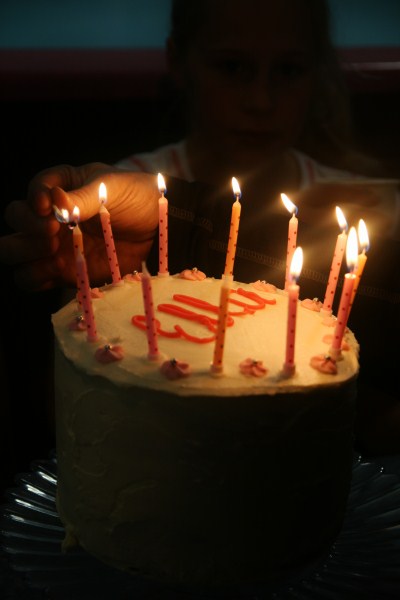 Originally, a Croquembouche was on the menu but we ended up changing to a beautiful layer cake.  I had seen these around on other blogs and Pinterest and we were keen to try one. 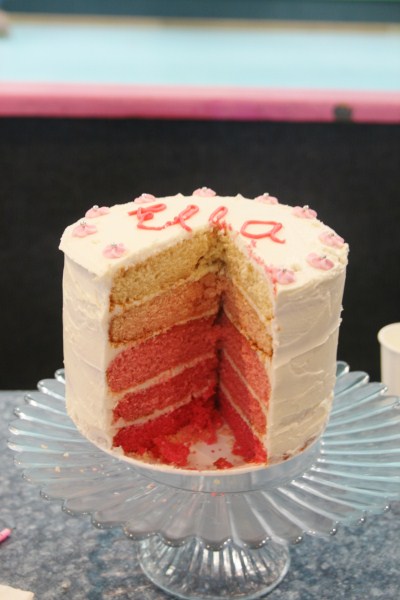 The cake was dairy free so that my son, Eddie, could enjoy a taste.  I used my basic cake recipe  and the icing was made with Nuttelex.  Nuttelex is not nearly as tasty as real butter but we loaded it with vanilla and I have to say that it was one of the tastiest birthday cakes I have had in a while.  Are you allowed to say that about your own cooking?  Well ….it was good!

To make the cake, I tripled my usual cake recipe ie. 3 cups of flour, and I used plain white flour (instead of the wholemeal spelt that I usually use)  This gave it a nice smooth texture.  After I mixed the batter in my Thermomix, I divided the mix into five soup bowls.  The bowls were all the same so that it was easy to judge the quantity and make sure each bowl was the even.  Then I added the colour; Rose Pink.  Working in multiples of four drops, starting with four drops in one bowl, then eight in the next and so on.  Remembering to leave one bowl uncoloured.

I have two cake tins the same size so the five cakes took three batches of baking. When all the cakes were cooled I sliced the peaks of the cakes to make them flat(ish) discs.  Then I made a large batch of butter (Nuttelex) cream icing.
The cake was assembled with icing in between each layer.  More icing went on the edges to fill in the gaps.  Then I gave the whole cake a quick crumb layer of icing and popped it in the fridge.  One last layer of icing over the whole lot, a few decorations and we were done.  Not too fiddly, certainly worth the effort and quite spectacular.  And did I mention it tasted great!